How the Girl Scouts and Palo Alto Networks Are Creating Opportunity 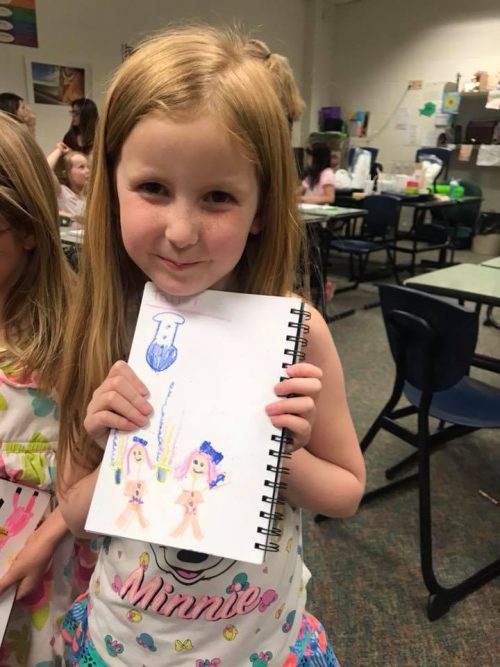 Lindsey Sanford is the Global Employer Brand Program Manager at Palo Alto Networks. She lives in Reno, Nevada, and has been a Girl Scout Troop leader for two years. Her Girl Scouts have earned all three Daisy cybersecurity badges, and are pursuing badges in engineering and programming.

Two years ago, an article mentioning that study came across my desk as I was frantically searching for an activity to do at an upcoming Girl Scout meeting. And it honestly stunned me. I have a seven-year-old daughter whose aspirations change from lifeguard to dancer to singer to scientist to engineer to ballerina — and that’s just in one day. Her passion for her life and the optimism she has about the choices available to her have led me to believe that maybe this study isn’t so true any longer.

I put it to the test, obviously in an environment that wasn’t “official.” I asked my troop of 18 girls to draw a scientist. I gave them no other parameters, just the simple direction:  draw a scientist.

All but one of the girls in my troop drew a woman.

The study has been repeated multiple times throughout the years. After all, the 70s were quite some time ago, and a lot has changed — women’s rights have evolved. More women than ever before are going to school, going back to school, and getting into new career fields. Since the first study, over 20,000 children’s drawings have been analyzed, and from the 1980s on, the percentage of scientists drawn as women has increased to 28%.

But there’s still a problem.

As girls mature, they are receiving messages somewhere that are making their assumptions, their possibilities, change. And while there is so much progress, there is still work left to do.

That’s where organizations like Girl Scouts of the USA come in. Girl Scouts’ leadership continuously identifies new curriculums to share with girls throughout the course of their involvement with the organization — introducing them to new sciences and new career paths.

One curriculum that is especially close to my heart is cybersecurity. In July 2018, the Girl Scouts, in partnership with Palo Alto Networks, created a series of badges to introduce young girls in grades K-5 to cybersecurity. Nine badges were created to progress girls through curriculums designed to introduce cybersecurity concepts, helping them grasp a complex industry.

Last week, Palo Alto Networks and the Girl Scouts announced another nine badges for girls in grades 6-12, crucial years of self-discovery for young women. These badges will take girls through the workings of computer technology, providing them with the understanding of safety and protection in the digital age. They’ll get a taste of real-world hacking, providing a glimpse into the world those in the cybersecurity industry face each day.

While this is just one of the new ways we continue to find to reinvigorate young women’s opportunities in the world of science, it’s one that I take great pleasure in pursuing.